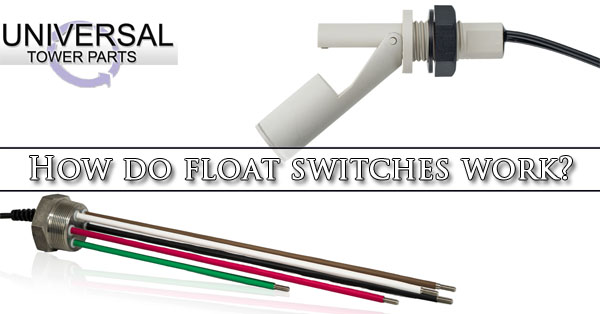 Are you searching for “how do float switches work”? This post by Universal Tower Parts can point you in the right direction and help you better understand how float switches work. Call us at (602) 997-0403 for more information about our Float Switches.

Float switches open and close circuits or dry contacts as the water level falls and rises. The normal float switch will normally be in the closed position, meaning that the circuit isn’t complete and no electricity will pass through the wires.

Once the water level has dropped below a certain point, the circuit will complete itself and then send electricity through a whole circuit to trigger alarms.

Magnetic reeds are sealed inside of a plastic or stainless steel stem. The switches move up and down as the water level decreases and increases and will break apart and come together at various heights that you specify when it is installed.

The issue with old float switches is that they may deteriorate due to poor water quality and electricity passes through them. This is why the water level controls create their own float switch replacement that uses sensing probes to gauge the water levels instead of floats.

How do the new switches work?

The sensor probe acts as their own sensor and don’t let electricity pass through the probes which keeps them from deteriorating, fouling, and degrading. All of the electronics are built within the head, so you can connect them to your control panel directly. Once the water level has been detected, it will cause the alarm to be triggered. Depending on the type of float switch, there may only be a single alarm or multi-point alarm that will be triggered. 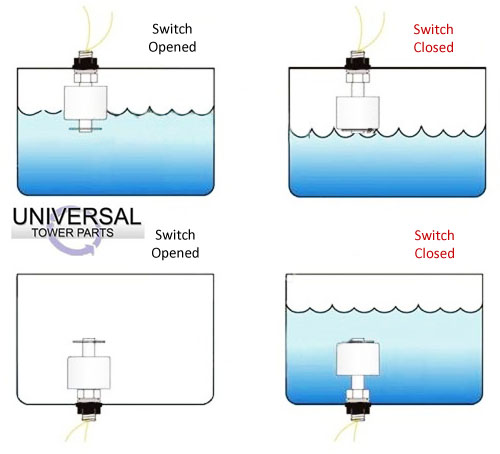 In a multi-point float switch, an alarm triggers an LED light to turn on, and sends a signal to turn on an automatic water pump refilling the water back to the pre-programmed level. These switches are exceptionally versatile because of the many useful options available.

Thank you for reading our post on “how do float switches work”. Stay tuned for more information on Universal Tower Parts. If you are looking to buy float switches, call us today at 602-997-0403.